I am currently unemployed. The café that I was working at has changed hands, so I took it as an opportunity to move on, move out of home and get on with my life. However, for now I am still in fully-fledged holiday mode (which will only last a little while longer, or so I’ve told myself). This leaves lots of time to sit around in my onesie watching trashy daytime TV, eating toast and trying not to think about life. One of my many distraction techniques is to spend ludicrous amounts of time on Instagram. For the uninitiated, Instagram is like Twitter, but with photos. For those still dumbfounded, it’s an app that lets you post photos on a live feed, and follow other people doing the same. 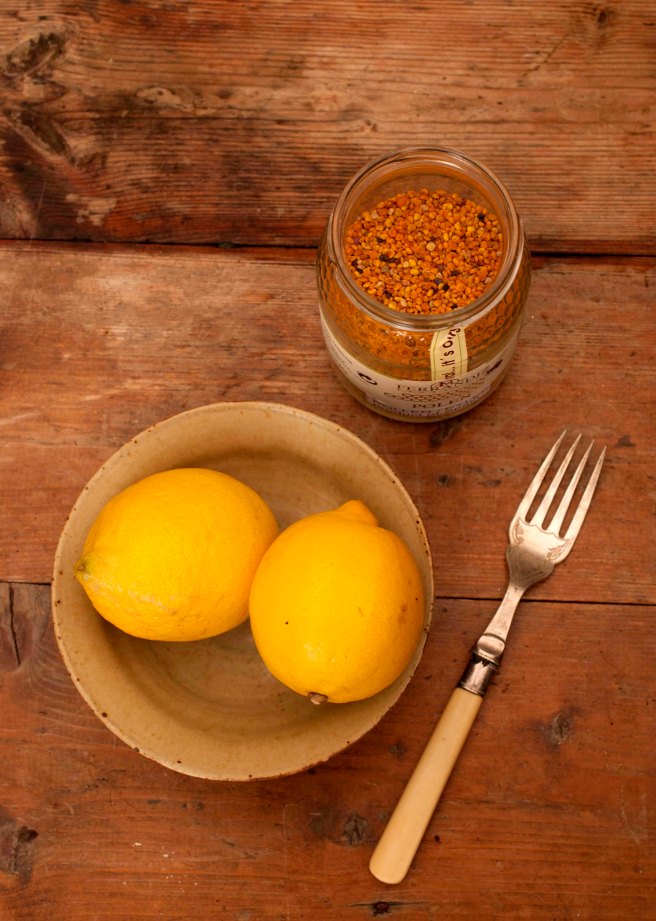 One of the things that is (horribly 21st century word) ‘trending’ on Instagram at the moment is bee pollen. It is especially prevalent among the health-obsessed Instagrammers, the type of people who see a spinach, kale, kiwi and avocado smoothie as a desirable breakfast. Things like porridge topped with chia seeds, hazelnut butter and bee pollen (and yes, I did just quickly pop onto Instagram to do a search for ‘♯beepollen’) are appearing. Bee pollen is formed by bees when they gather nectar- apparently they roll pollen into balls then discard it. It’s supposed to be very good for you, allegedly containing all the nutrients that humans need, which balances out the large amount of butter and sugar in the cupcakes ever so slightly.

I thought I would sprinkle some bee pollen on top of these cupcakes, definitely more for aesthetic appeal than for taste. It’s fair to say it looks much nicer than it tastes – it has a pleasant chewy texture but tastes oddly savoury.    I also used honey rather than sugar for the drizzling syrup, to stick with the bee theme and to give a sticky moistness to the cupcakes, which is complemented by the slight sourness of the yoghurt icing.

Makes 8. You will need a cupcake tin lined with paper cases.

For the topping (optional):

Zest of one lemon

Preheat the oven to 180C. Cream the butter and sugar together until pale and fluffy. Mix together the flour, baking powder and ground almonds. Add this mixture and the eggs to the creamed butter and sugar, alternating between the two. Stir in the lemon zest. Spoon the mixture into the cases, filling them 2/3rds full. Bake for 15 minutes, until risen and golden.

While the cakes are baking, make the syrup. Put the lemon juice and honey in a small pan, and simmer for about 2 minutes, until syrupy. Take the cakes out of the oven, but leave in the tin. Skewer the tops with a fork, and drizzle some syrup over each cake while they are still warm. Next, transfer the cakes to a cooling rack, and leave to cool completely.

To make the icing, put the yoghurt and cream cheese in a bowl and beat until smooth. Sift in the icing sugar and mix again. Spoon over the cooled cupcakes and sprinkle with the toppings.