This is an embarrassingly unoriginal Ottolenghi knock off. I even shamelessly copied the style of the photographs. The recipe is an amalgamation of two different offerings from Yotam’s latest cookbook, ‘Plenty More’. Apart from the dressing, which we cobbled together from random ingredients lurking at the back of the kitchen cupboard, it’s pretty much a dead copy. Which is unusual, as I don’t find myself following recipes much these days. I get too frustrated with following exact measurements and prescriptive methods, and end up disregarding both and producing something that bares little resemblance to the intended dish. One of the hazards of being a food blogger, I guess.

Ottolenghi provides an unstoppable font of inspiration for me. He combines ingredients in ways that I had never even considered (leeks, goats cheese and sultanas, for example) opening up a whole range of new tastes. Also, the methods and techniques of cooking he uses are so varied and interesting that they have me running straight into the kitchen to start experimenting. There’s usually one element of each of his recipes that elevates them to another level – such the addition of a particular spice, usually an unpronounceable Middle Eastern variety that can only be ordered online. I have invested in several Ottolenghi ‘essentials’, such as pomegranate molasses, sumac and za’tar, but don’t ask me what any of them actually are. All I know is that they often provide an elusive final taste to make Middle Eastern specialities taste much more authentic.

The tumeric roasted walnuts in this recipe are an example of the above – a simple ingredient transformed by the addition of a few spices and a different way of cooking. I’ve always considered turmeric a bit of a non-spice, its chief use being the vibrant yellow colour that it imparts. However, roasting walnuts in the spice brings out their sweetness, adding a remarkable depth of flavour. I have since learnt that turmeric is commonly used in sweet dishes, and some folk swear by drinking turmeric tea first thing in the morning. This somewhat fusion recipe combines these walnuts with fresh green veg, sesame seeds and a punchy, vinegary dressing. Hopefully Yotam would approve. 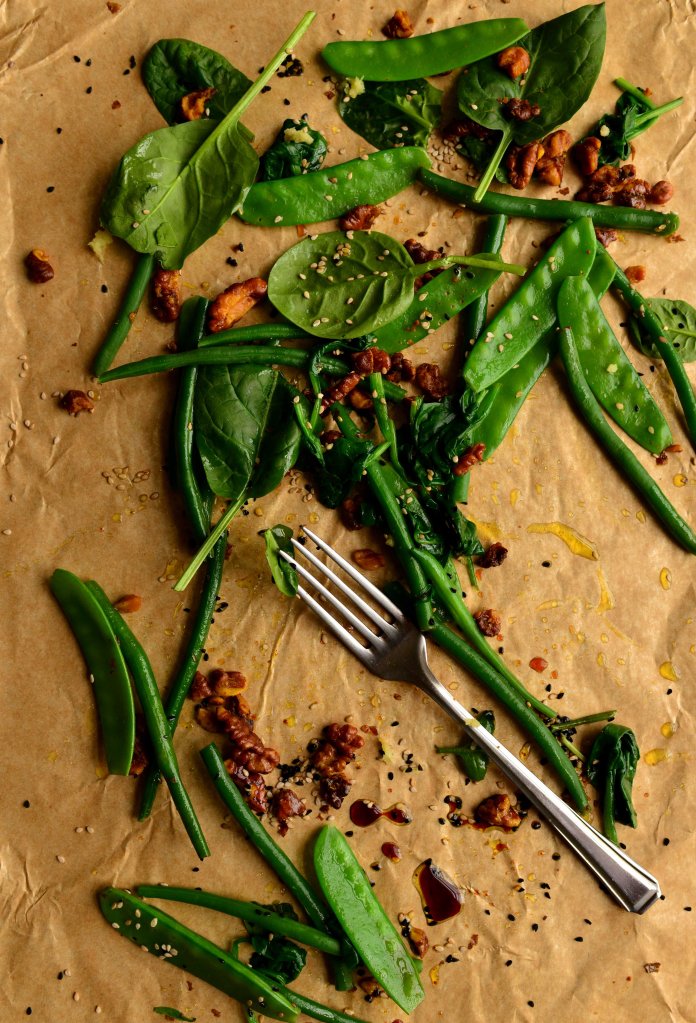 At the moment, I’m loving the chill in the air that signals early Autumn. The leaves are starting to turn, the days are drawing in and there’s already a sense of anticipation about the ‘C’ word. I also want to eat nothing but orange vegetables. Carrots, sweet potato and butternut squash become a staple of my weekly trip to the greengrocers. Most often I roast them with spices such as cumin and cinnamon, but also enjoy them simply boiled and mashed with lots of butter and salt.

Sweet potato is so versatile, being equally at home in sweet and savoury recipes. The unassuming knobbly vegetable lends itself really well to being baked into cakes. Vegetables in cakes is nothing new – if you go beyond the undeniable cliché of carrot cake there’s a whole new world out there. I’ve got a whole cookbook dedicated to cakes which contain all manner of vegetables, from courgette and lemon cakes to aubergine in brownies (yes, really). 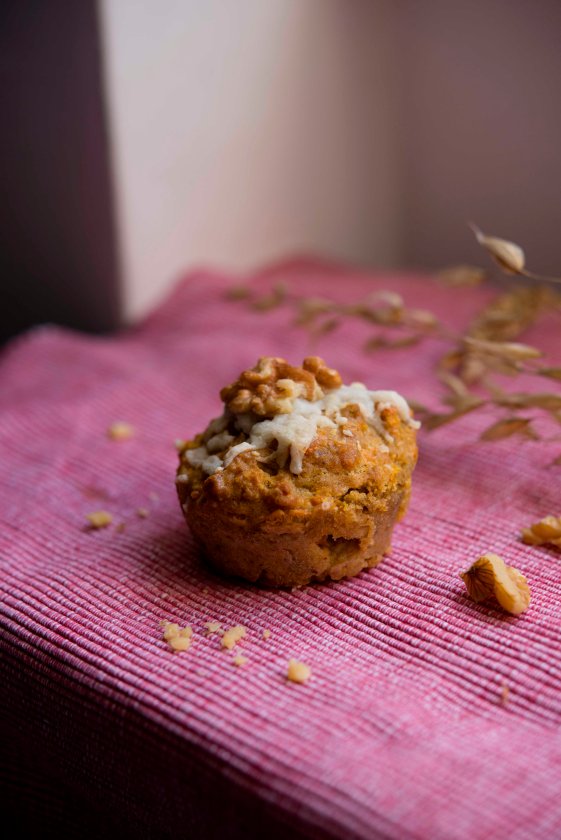 My friend Clare and I thought that some gentle Sunday afternoon baking was in order. So we decided to use the sweet potato to make some savoury muffins, utilising the natural sweetness of the vegetable to combine with the sour goats cheese. We used a combination of wholemeal, plain and polenta flour in this recipe, giving the muffins a slightly grainy texture and a more full flavour. But if you don’t want to faff around with this just use plain or wholemeal. The general muffin method is to mix together all the dry and all the wet ingredients and fold one into the other. The highlight for me of making these muffins was mashing the boiled sweet potato together with a frankly obscene amount of butter into a gooey puddle, then eating a sneaky spoonful (or three). 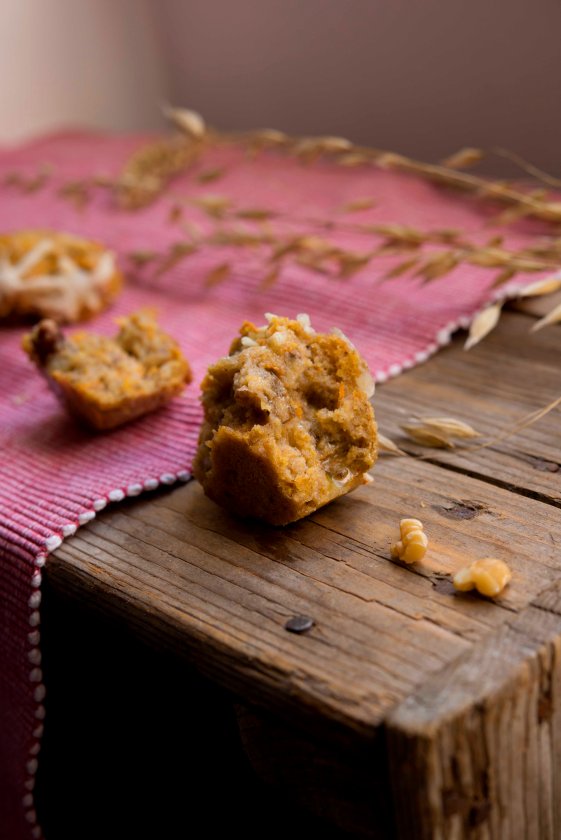 END_OF_DOCUMENT_TOKEN_TO_BE_REPLACED

I have recently upped from the sticks and moved to Bristol. Having lived in a small, and I mean really tiny, village for the past year and a half, living in a city again is exciting. The fact that I can walk to one of many bars just around the corner, have a couple of pints, then walk home again, is a novelty that I’m still getting used to (i.e. doing at every opportunity). 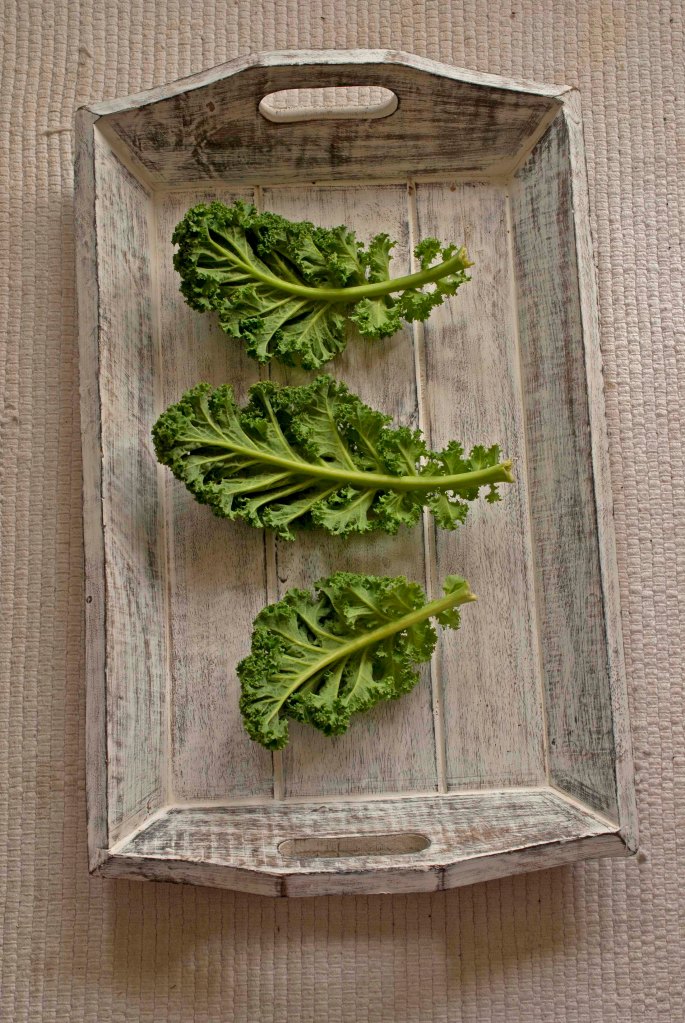 One of my favourite things about exploring a new city is working out all the options when it comes to shopping for food. Luckily, I live near a fantastic road (Gloucester Road, for those in the know), with plenty of brilliant veg shops, butchers, delicatessens and wholefood shops. All you could ever need really. Living near shops is another novelty for a country bumpkin like me, as my nearest shop in Devon is a 15- minute drive away. 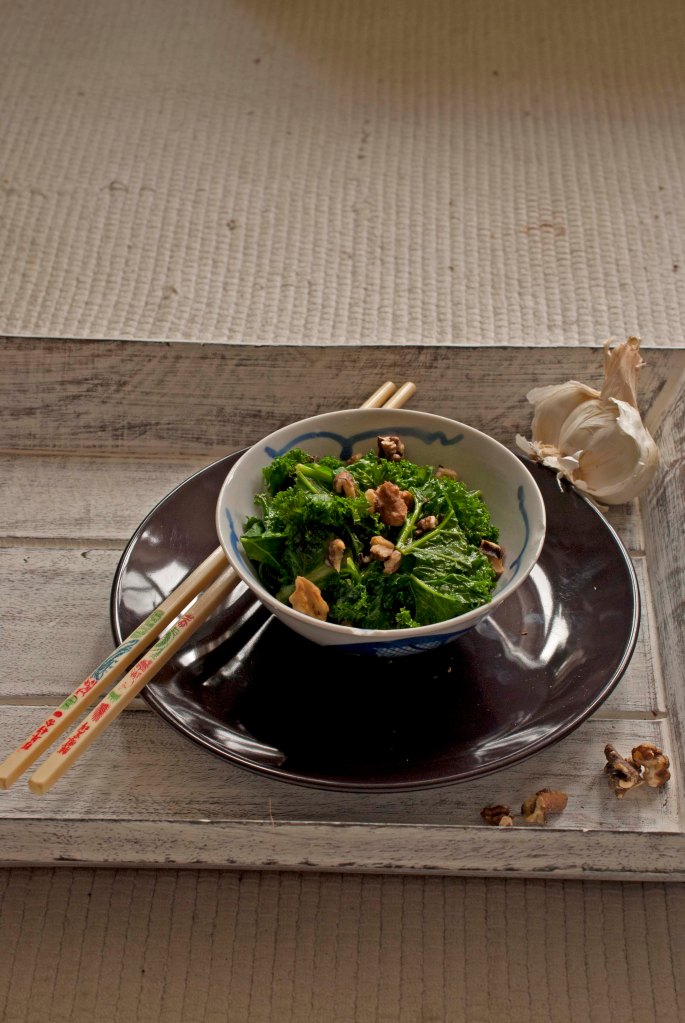 It was on one such trip to the veg shop that I found some of this lovely kale. I promptly bought a bag stuffed full of it, and set off home feeling a little smug. I love kale. My love for it preceded the Californian-superfood-make-a-breakfast- smoothie-out-of-it craze. My favourite way to cook it is like this – simply stir-fried with garlic and seasoned with soy sauce. The addition of walnuts is optional – you could use another nut or seed, such as almonds or sunflower seeds, or leave them out entirely. It was just my attempt at making this more of a ‘dish’.

END_OF_DOCUMENT_TOKEN_TO_BE_REPLACED 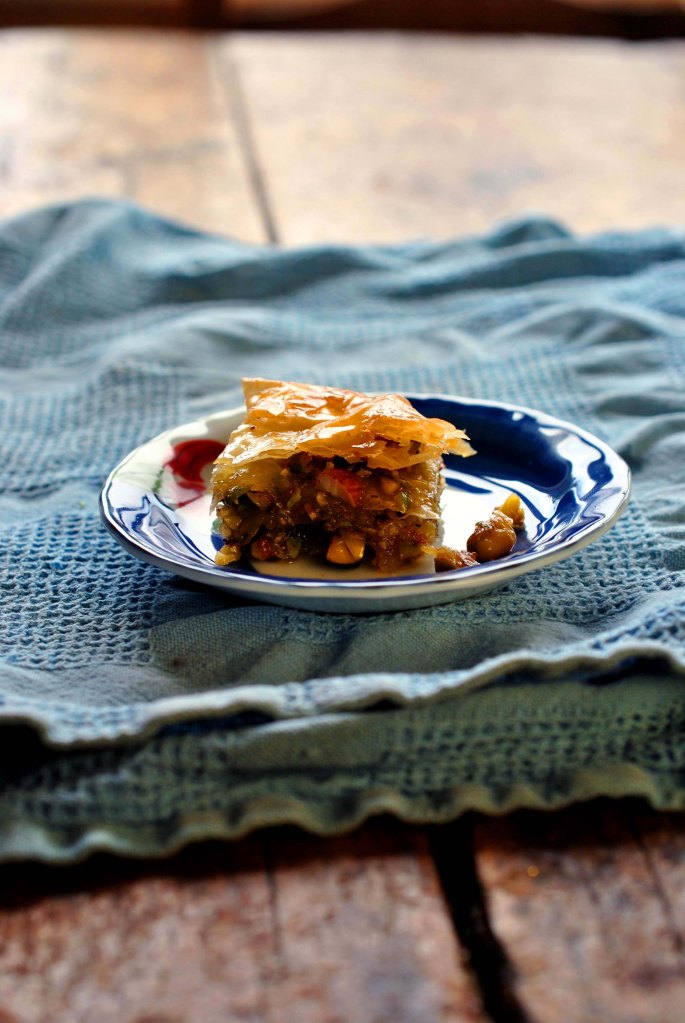 The summer before last, I went to visit some friends in the South-West Peloponnese, a beautiful corner of Greece unspoilt by hoards of tourists. Greek food, whilst being delicious, is rather same-y. I lost count of the variations of chargrilled aubergine dip, tzatziki and moussaka we tried. They were all slightly different, some being much more palatable than others, partly due to how much garlic each chef thought was acceptable.

The dessert of choice, not being presented with many other options, was baklava, a Greek and Turkish concoction made by drenching filo pastry and nuts in an insanely sweet syrup. I became mildly addicted to it, and many balmy evenings were spent hunting down the best. It took me the entirety of the week-long holiday to pronounce ‘baklava’ correctly. The emphasis is on the final syllable ‘va’, rather than the more natural Anglicised stress on the middle ‘k’, so it is said ‘baklava’. 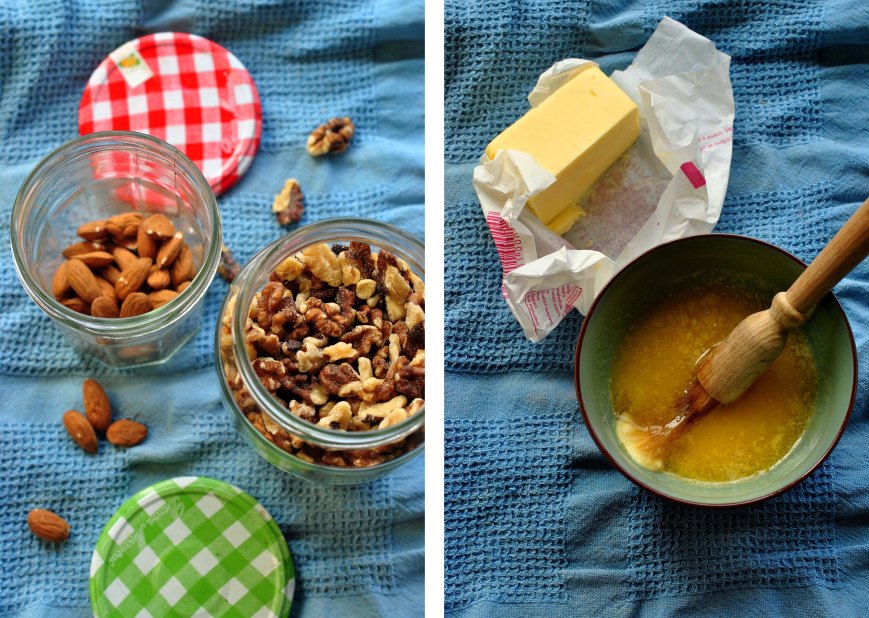 Pronunciation aside, here’s my take on baklava. Some of the best baklava we tried I think used honey in the syrup, rather than acres of sugar, so I’ve tried that here. I chose a mixture of pistachios, almonds and walnuts, but any nuts can be used. It is ridiculously sweet, so you only need small pieces.

END_OF_DOCUMENT_TOKEN_TO_BE_REPLACED 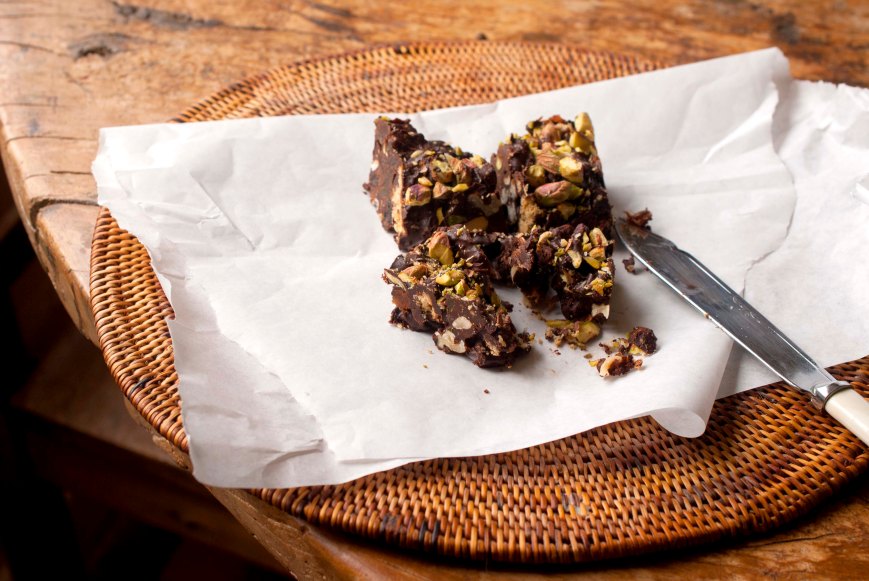 My friend Clare and I were talking today about becoming grown ups. When do you become a grown up? When you ‘wear a suit and kitten heels to the office’ as Clare put it? When you have a folder marked ‘tax’? Lots of people insist that they have never grown up – I met many a thirty-something in Thailand having a ‘gap life’. 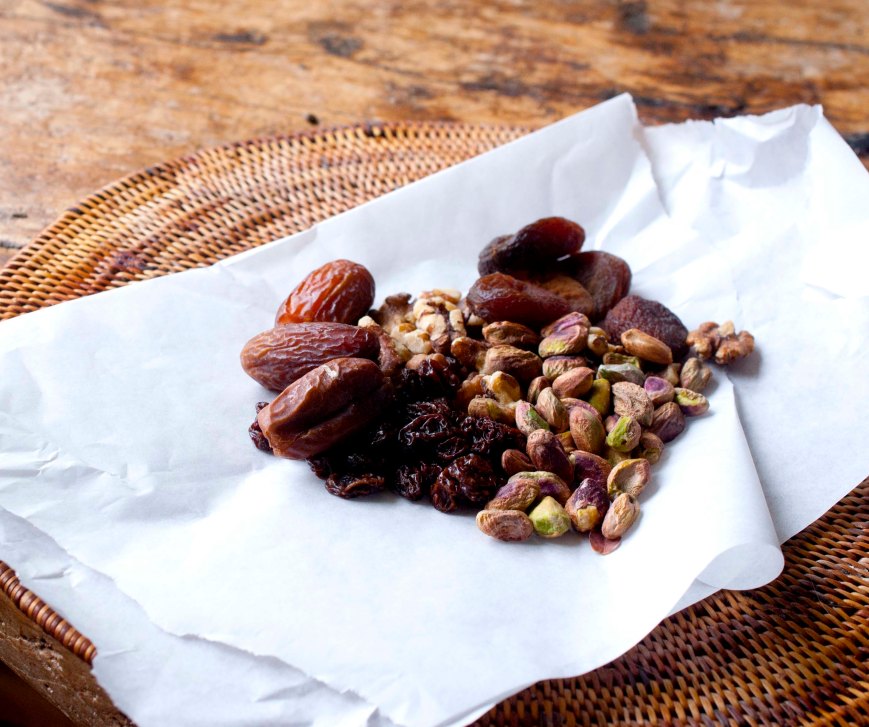 When I was at university, my housemates and I had a student food blog. It was all about how to eat nice things on a budget. One of the most memorable recipes for me was Rocky Road, made as a result of an essay-related sugar craving. In this recipe, I opted for the definitely childish combination of marshmallows, biscuits, glace cherries and the like. 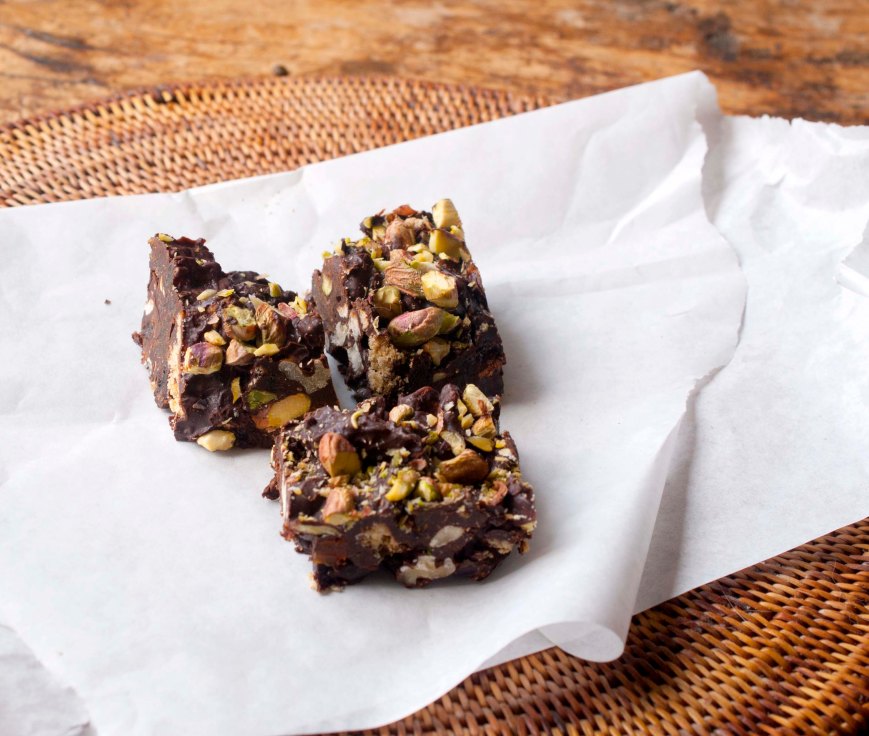 However, now I have left university and am supposed to be a full-blown adult. Therefore, I chose, maturely, to include more healthy ingredients this time. Such as pistachios, walnuts and slow-release energy oat biscuits. And I renamed the recipe ‘Chocolate Biscuit Bars’, to sound more adult. This was also a more expensive alternative, one of many economic realities to hit during adulthood, I imagine. But the result was just as yummy, and we didn’t feel so guilty when scoffing it down.